The Liberties – 10 years on

January’s blog is by Clare San Martin who revisited the Liberties, Dublin 10 years after leading the collaborative process to draw up of the Liberties Area Action Plan for Dublin City Council. The Liberties is an historic area of Dublin, famous as the home of the Guinness brewery.  Huge development pressure from the Celtic Tiger economy in the 2000s led Dublin City Council (DCC) to commission JTP to work with the local community to co-create a Vision and develop the Area Action Plan.

This article is an unabridged version of that published in the latest edition of the Academy of Urbanism’s Here & Now Journal:

In May 2019 I revisited The Liberties area of south-central Dublin to find out what has changed ten years after DCC adopted the Liberties Local Area Plan (LAP) – a community-led regeneration strategy for this historic city neighbourhood.  As leader of the Liberties LAP masterplanning team, a productive collaboration between JTP and Metropolitan Workshop, I got to know the place and people well and developed a great fondness for both. Fourteen months of intensive community participation preceded adoption of the Plan in 2009. It remains City policy and sets out a detailed strategy for delivering social, economic and physical regeneration through high quality placemaking on major opportunity sites.

But the property crash following the Credit Crunch meant developers, once hungry for land in The Liberties, put their ambitious plans on hold and dashed the community’s hopes of delivering new social infrastructure and environmental improvements. So ten years later I was unsure what to expect. Had the whole exercise been a waste of time? Would any of the transformative projects have happened? What I found took me by surprise and made me reflect on the value of the work we’d done.

Back in 2008 The Liberties community was passionate about defending their neighbourhood from what they saw as poor quality, inappropriate development. Indeed, they had good reason to be alarmed. In the 1960s historic streets in the Coombe area of The Liberties had been left derelict for years, blighted by a road ‘improvement’ plan before being demolished to sever the neighbourhood with a brutal four-lane highway. Hard drugs devastated the community in the 1980s. Historic buildings were left empty and many demolished as they deteriorated beyond repair. At the time we were appointed the Guinness Brewery was considering moving significant parts of its production process elsewhere. The National College of Art and Design (NCAD) was also talking of moving out of the area – and all this at the same time as other areas of the city, including docklands, experienced a boom. Developers were turning their eyes towards The Liberties and promoting plans for new buildings on the scale of those in docklands. The community strongly objected to schemes they felt would threaten the special character of The Liberties and their way of life. They were not against change and understood the benefits development could bring through funding improvements. But they were adamant that development should to be of an appropriate scale, include the restoration and re-use of heritage buildings and ensure existing residents were not driven out.

The LAP involved many hours of workshops and discussions with the community, DCC and other interested parties to achieve plans that were acceptable and economically viable. A comprehensive participatory Community Planning process led to the establishment of The Liberties Forum with focus groups facilitated by consultants developing and presenting back Action Plans for different aspects of the regeneration strategy. The final LAP included proposals to improve connectivity by establishing routes through some of the large industrial sites earmarked for redevelopment and detailed plans for improving the public realm and increasing greenspace. A new library and sports facilities were planned. A tourism strategy was designed to enable local traders to benefit from the million visitors coming to Guinness Storehouse each year with a heritage tourist trail to encourage visitors to walk through the area and stay a while rather than making straight for the Storehouse on a coach and leaving without exploring The Liberties. The LAP’s mandatory heights strategy set parameters to protect views from the Storehouse and other places. Former industrial sites were re-zoned for mixed use including new homes to accommodate around 7,000 new residents and a rolling programme of DCC housing estate redevelopment was agreed that ensured existing tenants could move into well-designed new homes in the same area.

But like the rest of the development industry we did not see what was coming next. By 2009 when the LAP became policy, the property crash had changed everything. Revisiting ten years later I found some parts of The Liberties unchanged, which is what I’d feared and expected. But other areas were transformed – some in the way we planned but some in a completely different way.

I met some residents who had taken part in the Forum and workshops and others who were unaware of the original process but actively involved in implementing greenspace improvements. One group invited me a workshop to plan how to involve more local people in the design and management of a new park at Bridgefoot Street on derelict land owned by DCC where they already had a community garden. 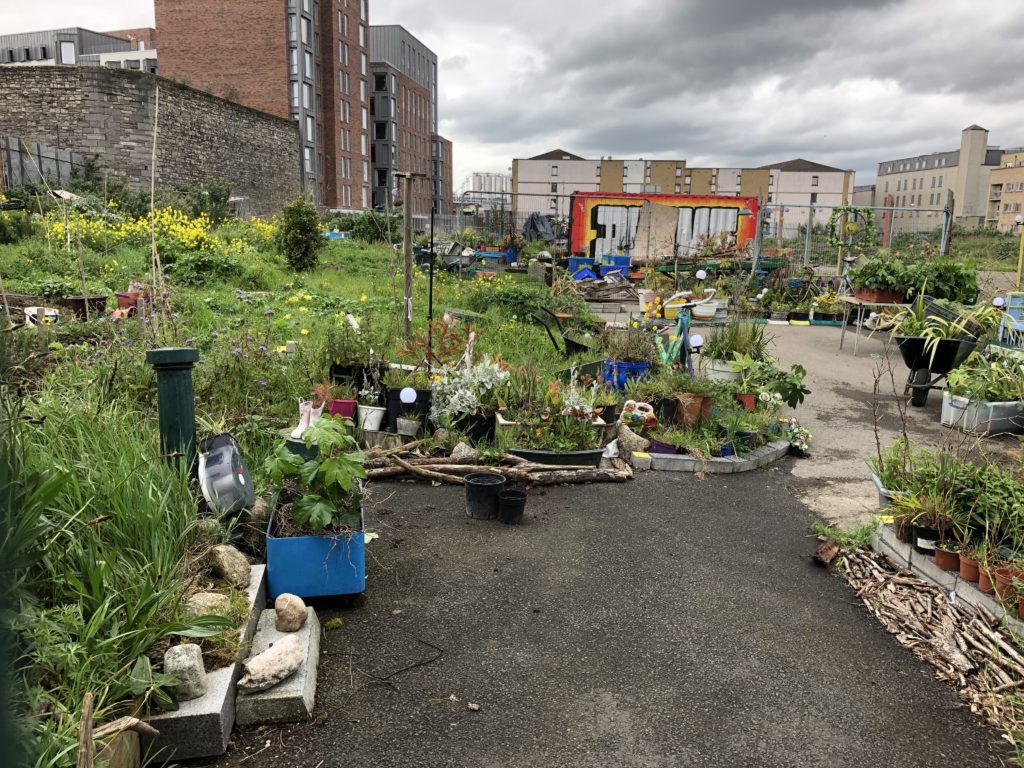 In 2014, in response to the economic situation that put the LAP’s ambitious plans in jeopardy, the City Council published a Greening Strategy focusing on sites they owned and which had a ‘realistic chance of being implemented in the medium term’. Many of these public realm improvements have now been completed. 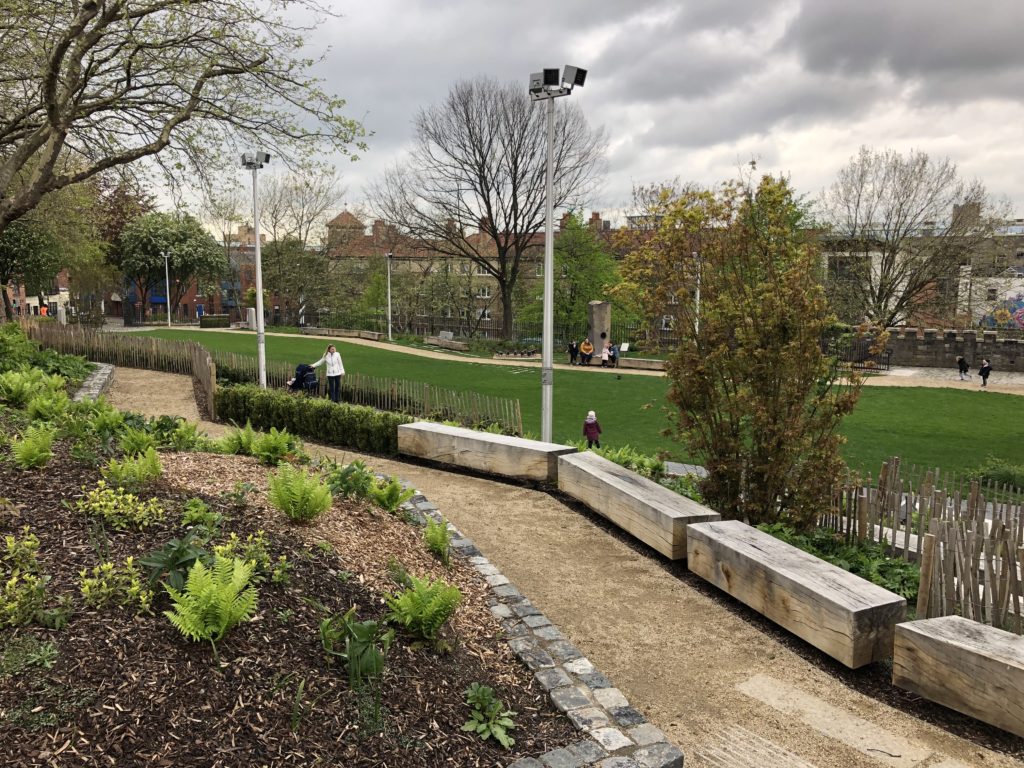 One of the great surprises was the revival of brewing and distilling – historic Liberties industries that had seemed on the decline or were looking to relocate. Much of the LAP was based on industries moving out and freeing up land for development of housing and other uses but I discovered Diageo Guinness has built a state-of-the-art brewery and were about to open their new whiskey distillery, branded as Roe & Co. Three other urban whiskey distilleries had also been built – each with an interesting story and each regenerating part of the Liberties.

The Pearse Lyons distillery on James’s Street has delivered a highly innovative re-use of the former church of St James and the sensitive restoration of its historic graveyard is nearing completion. The church now hosts whiskey tasting and has a dramatic glass spire.

Another LAP objective was the regeneration of Newmarket, a neglected area with an historic market square located to the South of the Coombe. Two new distilleries have been established there. This is fantastic, although it was disappointing to see the visitors arriving and leaving on a tour bus rather than wandering down past the antique shops along Francis Street or experiencing the colourful market on Meath Street as we had hoped. 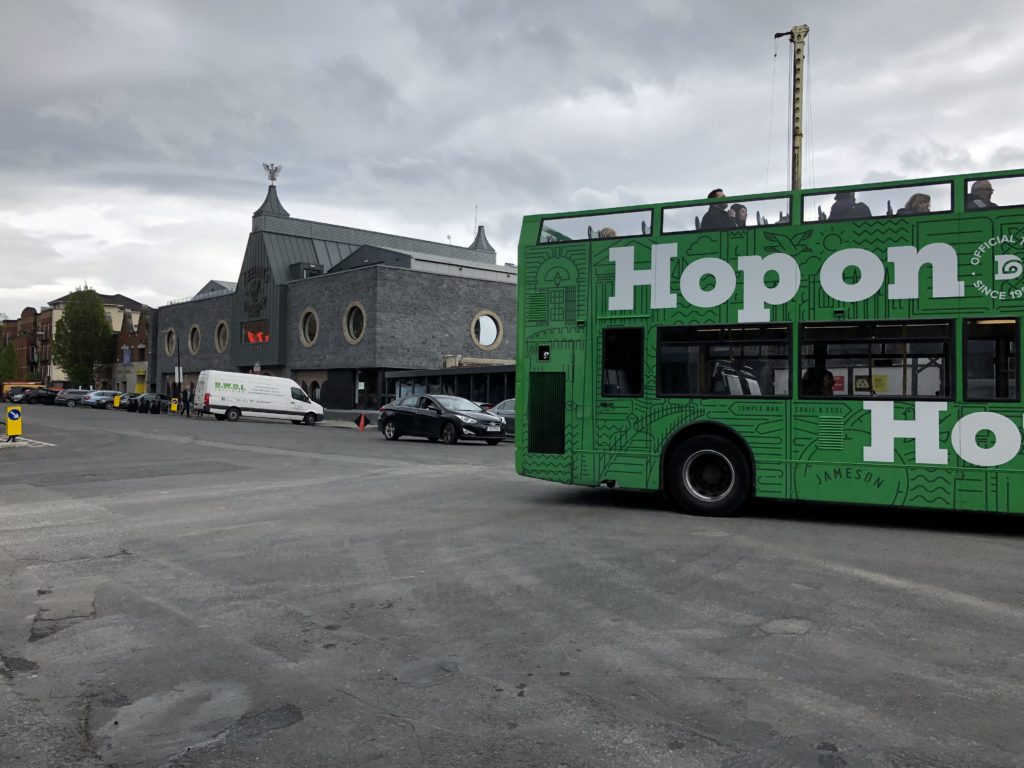 Newmarket also demonstrates another phenomenon seen throughout the Liberties – new student housing. Just outside the LAP boundary several large blocks have been built in a striking contemporary style. There is also a 3-star hotel with a rooftop bar. Residents I spoke to welcomed students and tourists but feared the amount of student housing was too great and would result in a transient community overwhelming other residents and changing the character of the area. The close-knit Liberties community where families have lived for generations is part of its unique charm. 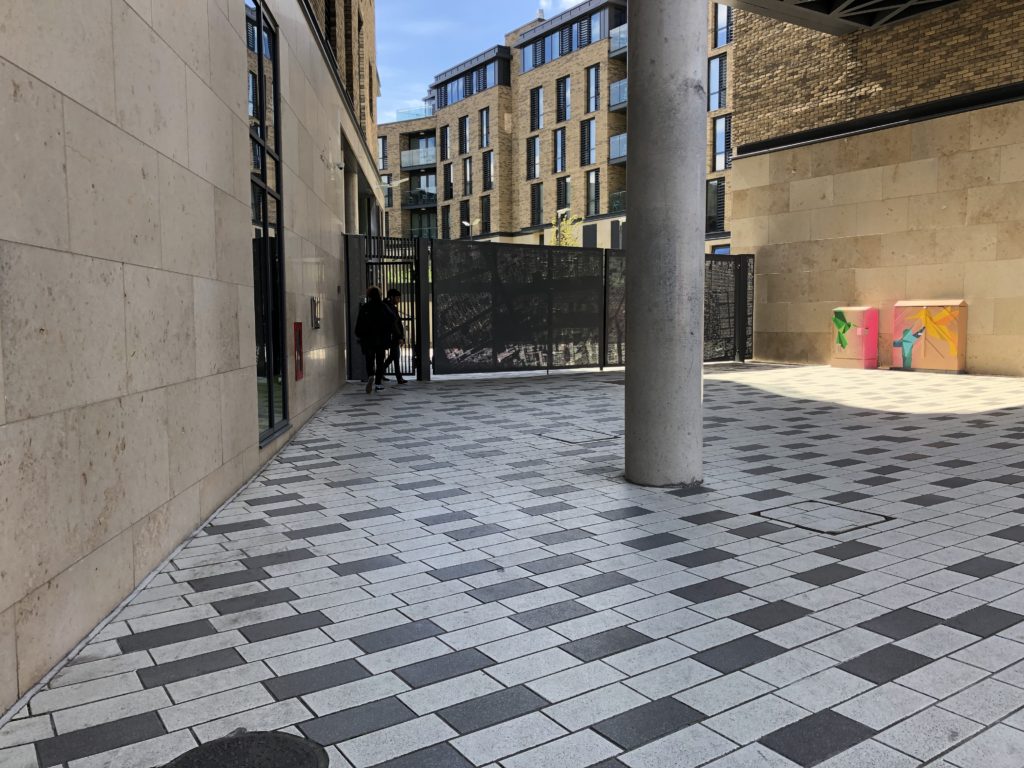 The same combination of student accommodation and a hotel has been built around the Digital Hub, Ireland’s largest cluster of digital media and internet companies which occupies former industrial buildings on Thomas Street. Here digital media companies are thriving in re-used historic buildings. A new pedestrian route has been implemented as planned and creates a convenient cut through a big urban block. A pop-up coffee shop was doing a brisk trade on the route. The LAP heights strategy has preserved the setting of St Patrick’s Tower, an historic windmill, and a network of internal routes and courtyards with restored historic structures and contemporary buildings has created a lively new quarter. 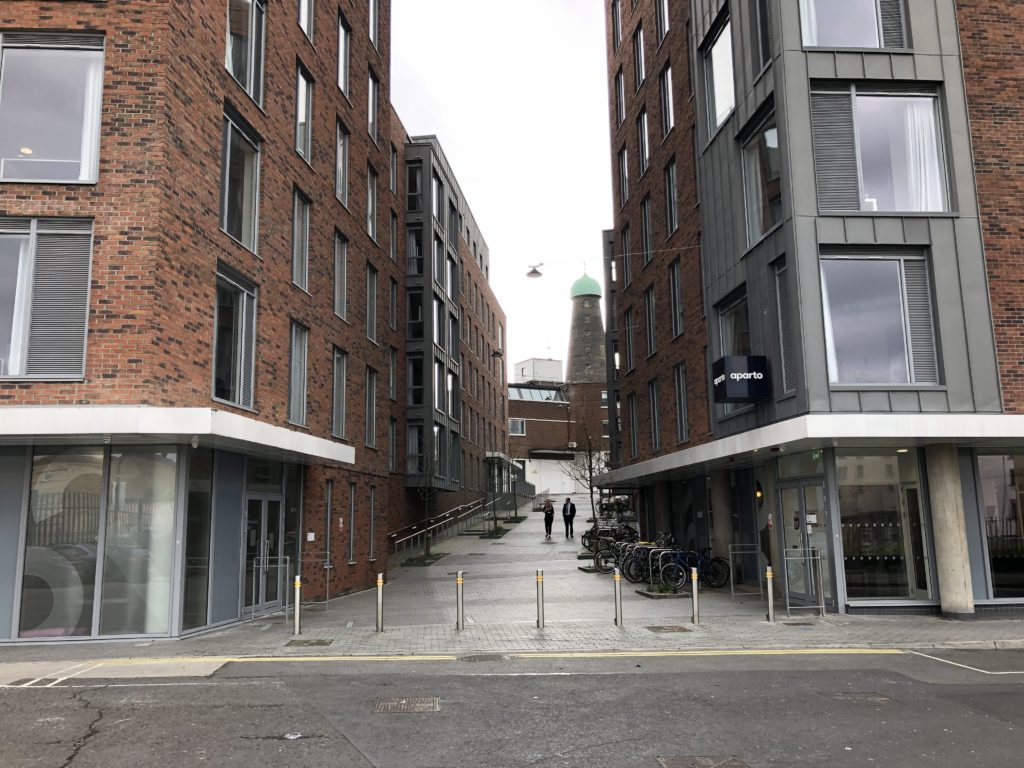 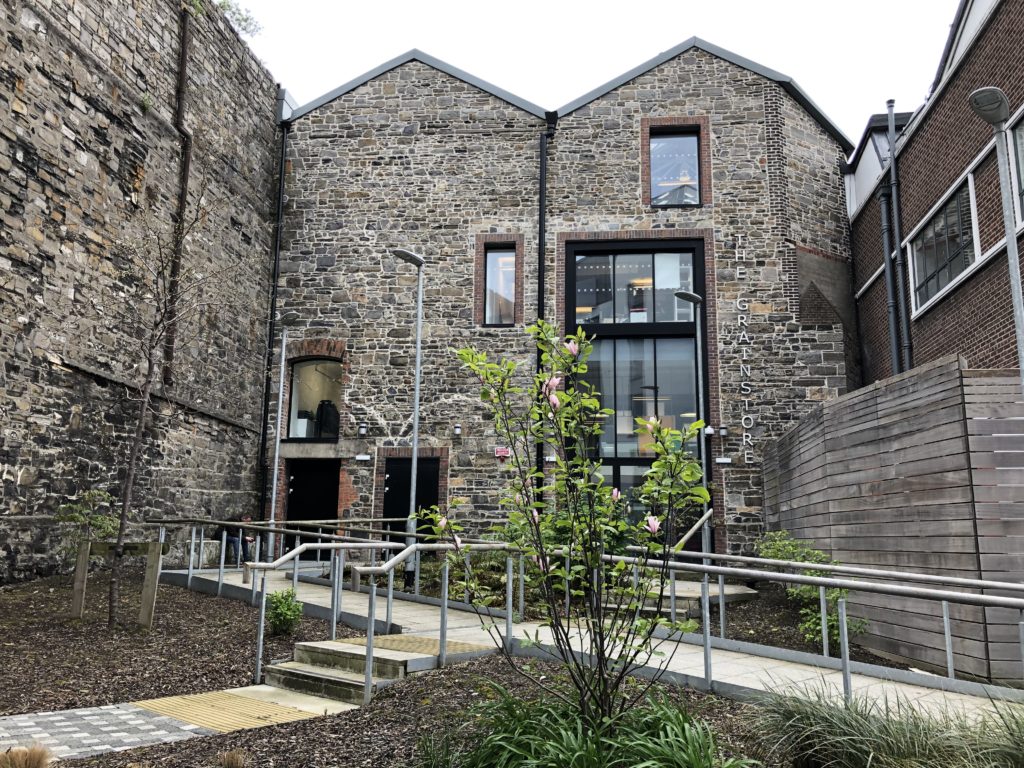 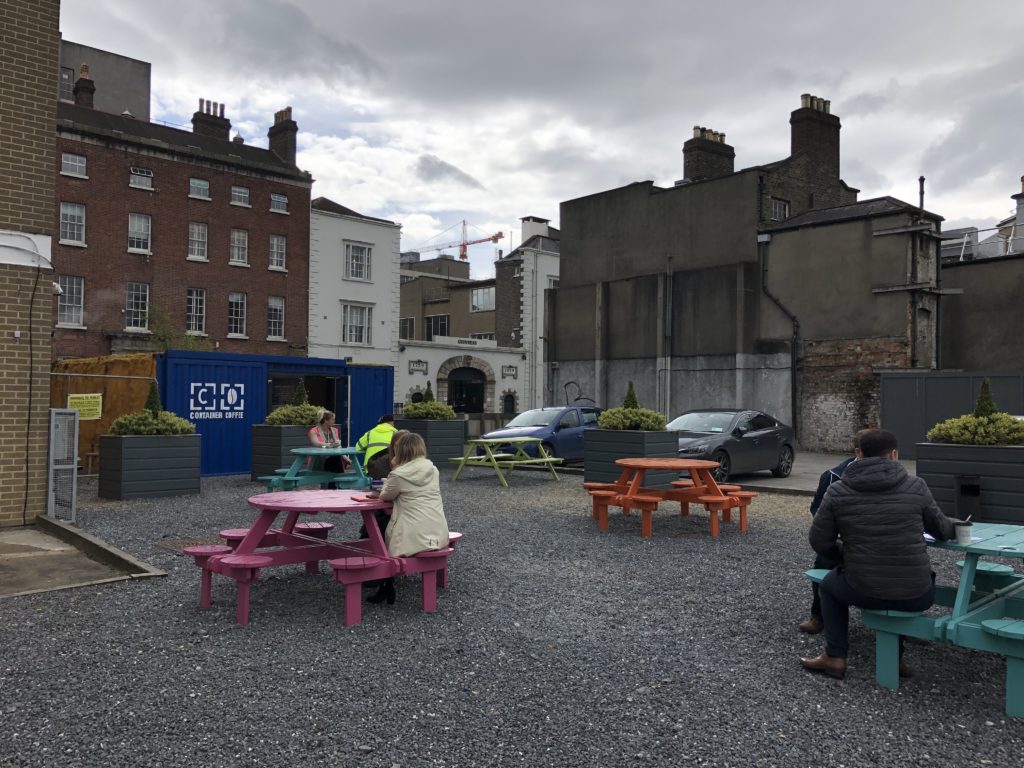 Bringing derelict historic buildings back into use, an important LAP objective, is evident throughout the area. But there are also many examples of important buildings left empty and deteriorating. A notable and tragic example is the Iveagh Markets on Francis Street, an indoor market opened in 1906 which has been empty since the 1990s. The mouldering structure blights surrounding streets that were once a bustling hub of small independent shops and street traders. 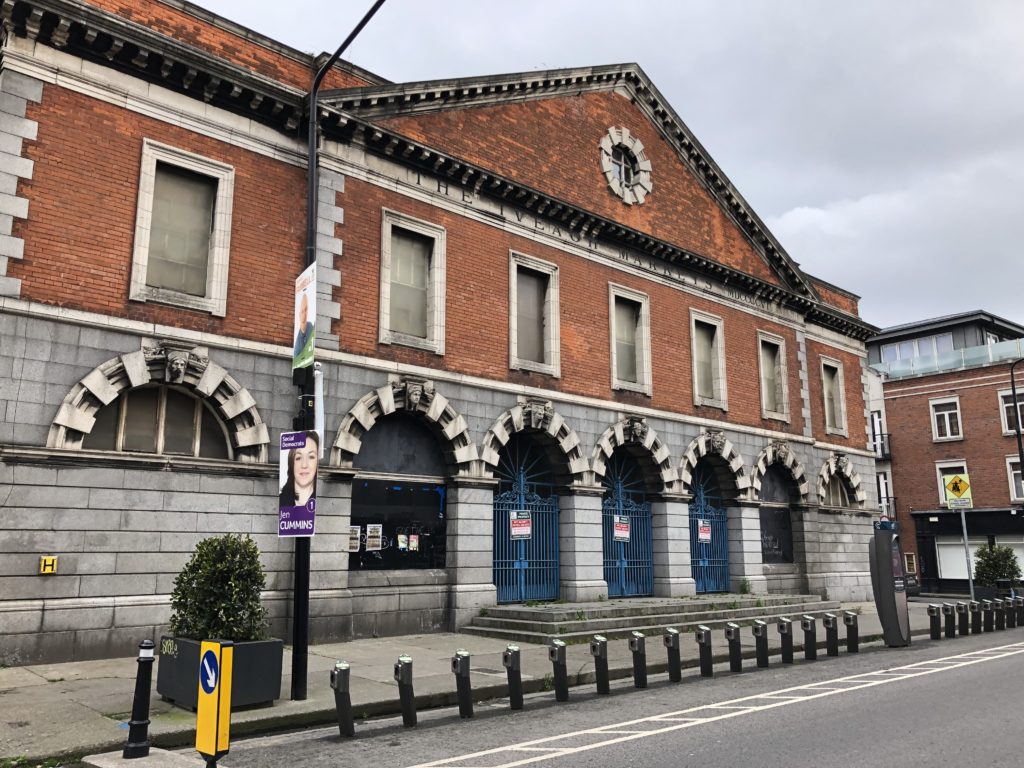 Disappointingly there was no evidence of DCC’s council estates being rebuilt or of the new library which was a central part of the cultural regeneration strategy. However, DCC’s 2009 housing scheme at Timberyard in the Coombe by architects O’Donnell and Tuomey, provides an excellent exemplar for future social housing in The Liberties. 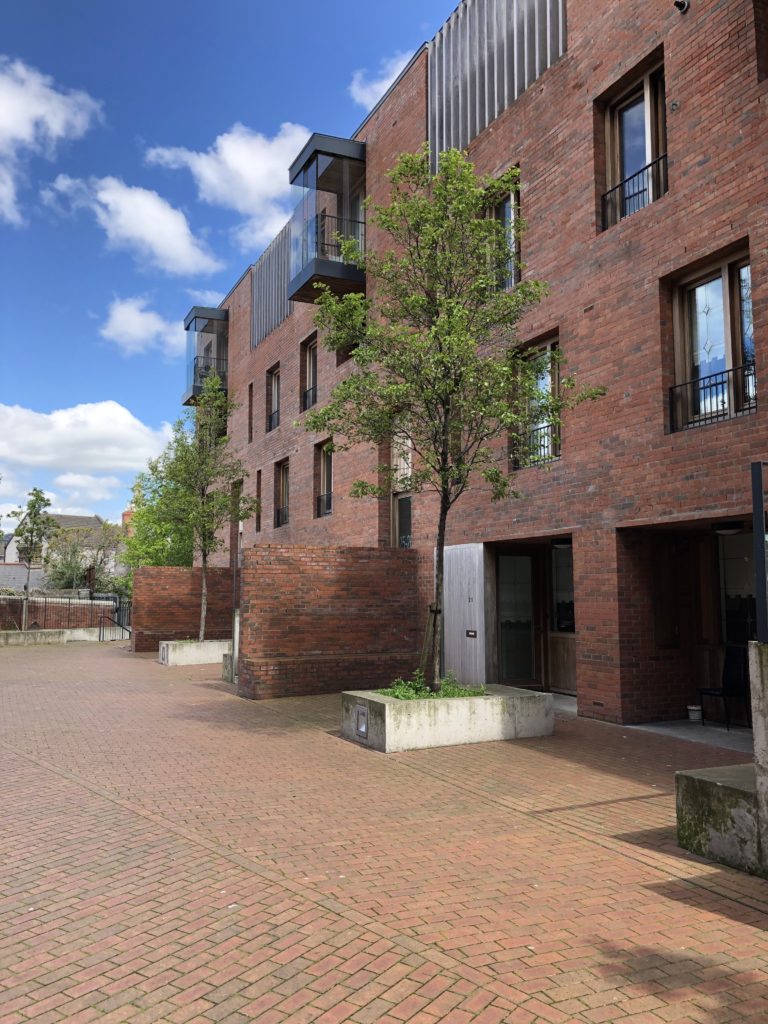 In response to the slow delivery of housing nationally, the Irish Government introduced a new fast-track planning system in 2017 whereby planning applications for housing developments over 100 residential units and 200 plus student bed spaces can be made directly to Ireland’s national planning appeals board, An Bord Pleanála. All applications must be determined within the target period of 16 weeks and although pre-application discussions with the local authority are required, the time constraint means these are limited. Many people I spoke to were concerned that design quality and The Liberties regeneration objectives would be ignored in the rush to get housing built.

So, on reflection, The Liberties LAP covered such a complex area and in so much detail that it was unrealistic to expect to find it implemented as planned, even without the economic downturn. But it did provide a robust framework for public realm improvements that enabled DCC to implement them knowing that each individual improvement would support the creation of a cohesive place over time. It was flexible enough to enable DCC to prepare amended plans that adapted to new economic circumstances without losing the overall Vision.

There are certainly successes to celebrate like the Digital Hub and Guinness quarters and the new distilleries. But urgent action is needed to save the Iveagh Markets and other heritage gems. The improvement of DCC’s housing estates remains a challenge and the increasing amount student housing a concern.  If left unchecked it could reach a tipping point that drives other residents away including the indigenous Liberties families who are the heart and soul of the place.

The comprehensive community engagement for the LAP is remembered by some but a new generation of activists has emerged. Residents’ groups are actively involved in a host of individual projects but lack a central forum which would enable them to act more effectively. It would be a terrible waste if a rush to deliver housing numbers led to the shared Vision unravelling and poor quality schemes like those the community objected to all those years ago being built.

The Liberties still has huge untapped potential. There are major opportunity sites to be brought forward. Its community is still passionate about protecting its heritage and way of life. With many long-planned projects now underway the Vision seems much closer to being realised even though it has taken a lot longer than expected and will need to adapt to changes we can’t foresee. But that’s what great neighbourhoods in great cities do – and The Liberties in Dublin is certainly one of them.