20/20 Visions: Collaborative Planning & Placemaking is now available to order from RIBA Bookshops.  In researching for the book, the author, Charles Campion, wrote case studies on Charrette processes from around the world. Many were based on first-hand experience and always with input and guidance from the many people who led these projects. Here is a case study chosen for this blog that was written with the help of Urbanismplus Director, Kobus Mentz and Senior Urban Planner, Susannah Goble. 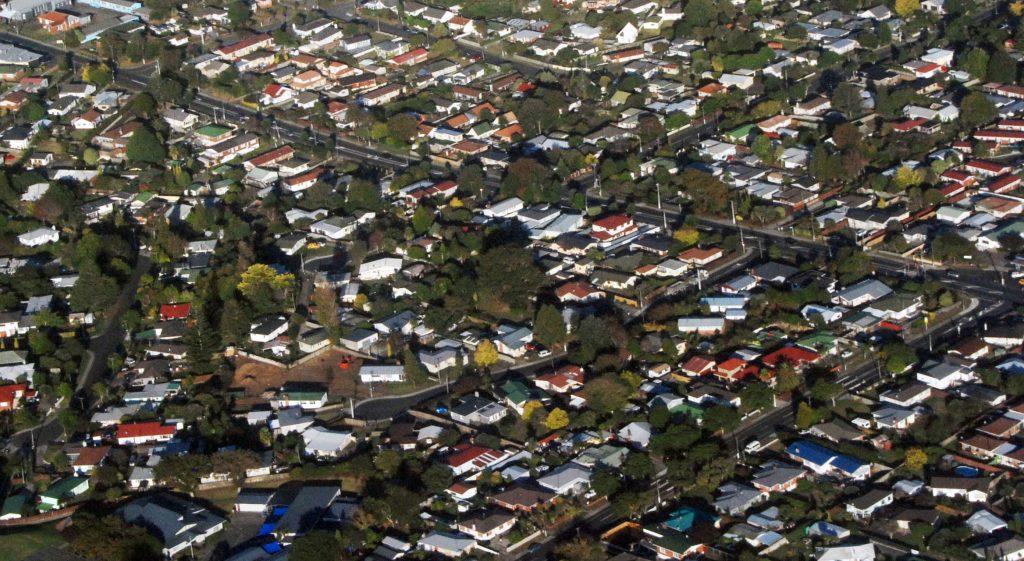 Auckland, in the North Island of New Zealand, is the largest city and most important economic centre in the country and its diverse citizenry of 1.45 million, includes the largest Polynesian population in the world. The city’s growth in the early twentieth century was shaped by the rail and tram network but the rise of the private car subsequently led to Auckland developing a strongly suburban character.  Although, in many regards, the quality of life is high, Aucklanders cite traffic congestion and poor public transport as significant negatives.

Today, Auckland is experiencing unprecedented growth with an additional one million people predicted by 2043. In addition, there is an affordability crisis, due in part to a lack of housing supply, and the consequences of this are perceived to be a threat to the strength of the national economy. Regional urgency to plan for growth has therefore been compounded by pressures from central government.

The Transport for Future Urban Growth (TFUG) project was set up by local government agencies, Auckland Transport and Auckland Council and the central government NZ Transport Agency.  It was decided that the project should not just be transport focussed, but that other disciplines would have equal say because transport has profound and long lasting effects on communities and urban growth with serious environmental, economic, and social consequences.

A highly integrated process was required, not only to address the many disciplinary objectives, but also for speed due to the urgency and the inter-agency nature of the project. It was decided therefore that a carefully planned Charrette process was necessary.

In late 2015, the three key agencies, their project teams and discipline leads, were joined by consultants to participate in the Charrettes, devised and led by Kobus Mentz from Urbanismplus (other consultants were AECOM, Flow Transportation, Beca, Jacobs, TTM, Pocock Design:Environment, and Prosperous Places). The process was designed around six week long charrettes, held over a seven week period, with numerous shorter workshops occurring before and after this period. 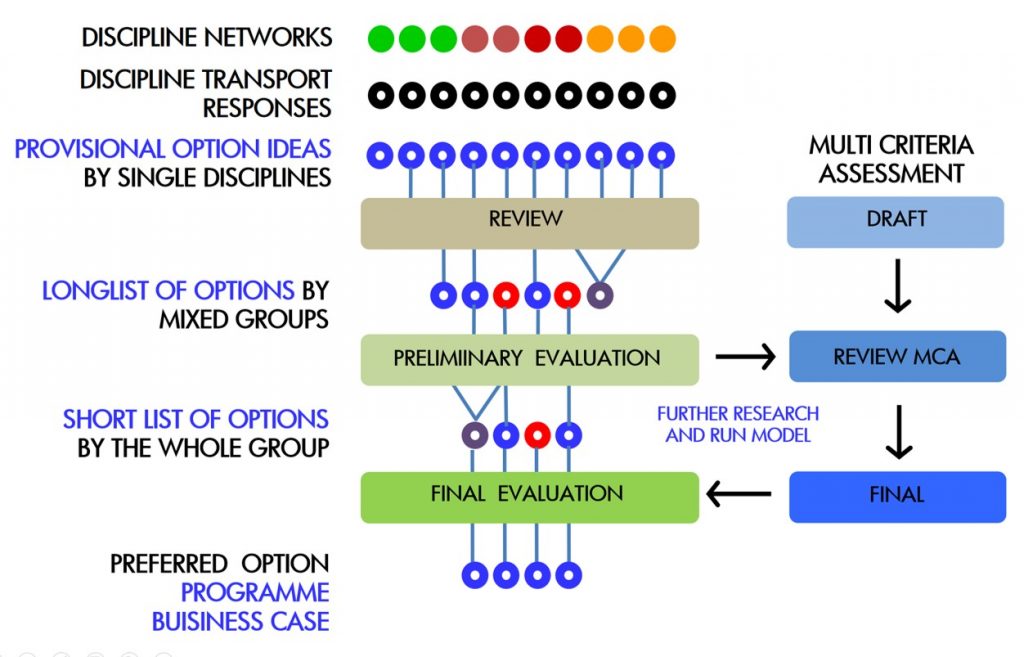 The five month long project began with a scoping workshop, process workshop and several sessions to determine the required outputs. Three week-long charrettes (one for each growth direction to the South, North and North-west) were then held to develop long-list options and consultation sessions were held with elected members, iwi, developers, and the public with outputs fed back into the workshops. Traffic modelling of options and review of multi-criteria analysis was undertaken between Charrettes to inform the next stage. Three further week-long Charrettes (one for each growth direction) were held to develop short-list options and preferred programmes.  And finally, an implementation workshop was held, which prioritised all major transport infrastructure to ensure alignment with the thirty year Future Urban Land Supply Strategy. 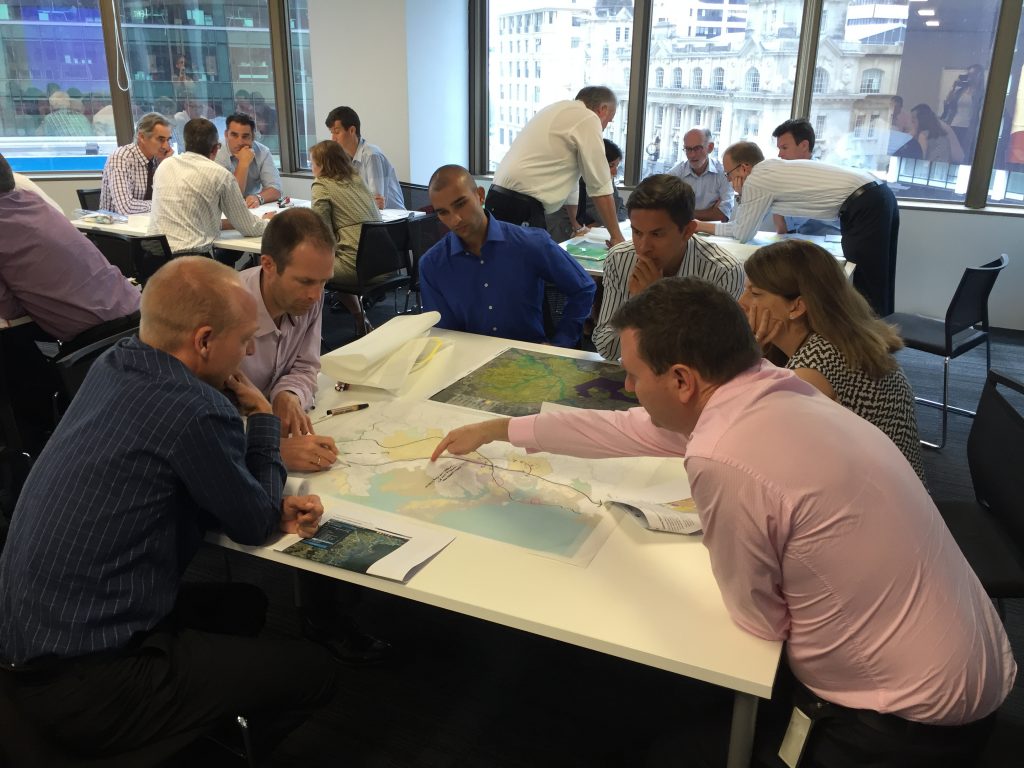 While the Charrettes were tasked with technical complexity, many normative objectives were set and delivered, including:

The Charrette process delivered over 300 individual long-list options which were evaluated by all disciplines and modelled. From the resulting short-list of options a series of programme options were built. These were intensely scrutinised to ensure the best balance between supply and sustainability was found, and resulted in new hybrid programmes, and ultimately four preferred programmes for each growth direction. 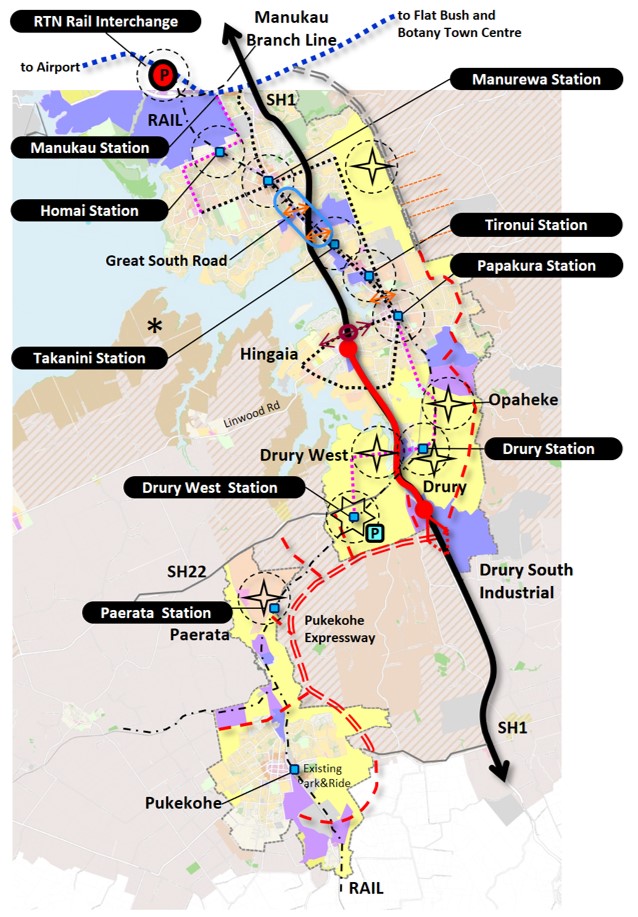 The resulting strategy prioritised $8 billion of transport infrastructure for 30 years of growth. The following specific outcomes were delivered for the three growth directions:

The project proposals were quickly endorsed by the NZ Transport Agency’s Board, Auckland Transport’s Board, and Auckland Council and this allowed the development of Detailed Business Cases for each preferred option to get underway. At the time of writing, Auckland Council is developing structure plans to guide the zoning and land development to align with the outcomes of the charrettes.

The process allowed the planning / design professions to deliver promptly on an issue of wide economic and private sector importance while engaging widely and maintaining environmental standards. It has achieved a strategy that signals a step-change for Auckland’s future by delivering more autonomous and affordable communities supported by good public transport choices. This would not have been possible without having all the discipline experts in the room at the same time to challenge, problem solve, and inspire.

The TFUG project team continue to work as an amalgamated unit, with personnel from all three alliance agencies working in one office, allowing for continued integration, efficiencies, and multi-agency agreement across the different project streams.

In 2017, the process won the New Zealand Planning Institute’s 2017 Best Practice Award for Integrated Planning and Investigations. This Charrette-based approach can serve as a model for similar challenges internationally, allowing central and local government to work together with stakeholder input to produce a clear and deliverable pathway for investment.