“An open and collaborative spirit prevailed during the workshops.  People commented that new voices were being heard.”

Auroville was founded in 1968 by the spiritual leader Mirra Alfassa, the Mother, outside Pondicherry, Southern India as a universal town where men and women of all countries could live in peace and progressive harmony above all creeds, all politics and all nationalities.

Much progress has been made over the last 50 years, including the environmental restoration of the land, and more remains to be done to develop Auroville and raise the population up towards the 50,000 inhabitants originally envisioned.

Beginning on 7 January 2019, Auroville’s town planning and development research organisation l’Avenir and an international team led by Andreas von Zadow facilitated the “Auroville: A Way Forward” charrette to work out baselines for Auroville’s next decades and develop a Way Forward Strategy reflecting on:

Auroville’s January co-design sessions were an opportunity for the community to consider the difficult issues that have stalled growth and development in recent years and to explore ideas for the way forward. I was privileged to participate as part of the international team facilitating workshops and presenting our work. Over the 7 days of the Charrette I got to know many inspirational people committed to realising the utopian dream of The Mother, the city’s founder.

Over 130 people attended the workshops with a dedicated core of around 60 people participating in all sessions and continuing to work with the visiting team right up to the final presentation, in the true spirit of a charrette.

Much has been achieved in the 50 years since Auroville’s founding. The Matrimandir, a huge, gold-clad meditation centre set in lush gardens, has been built at the centre of the planned city. Large areas of forest have been re-established to halt soil erosion and people have built their lives around a community centred, eco-friendly lifestyle with a focus on unending education. But Aurovillians complained of a growing lack of unity since the completion of the great project of the Matrimandir which bound them together with a common purpose. 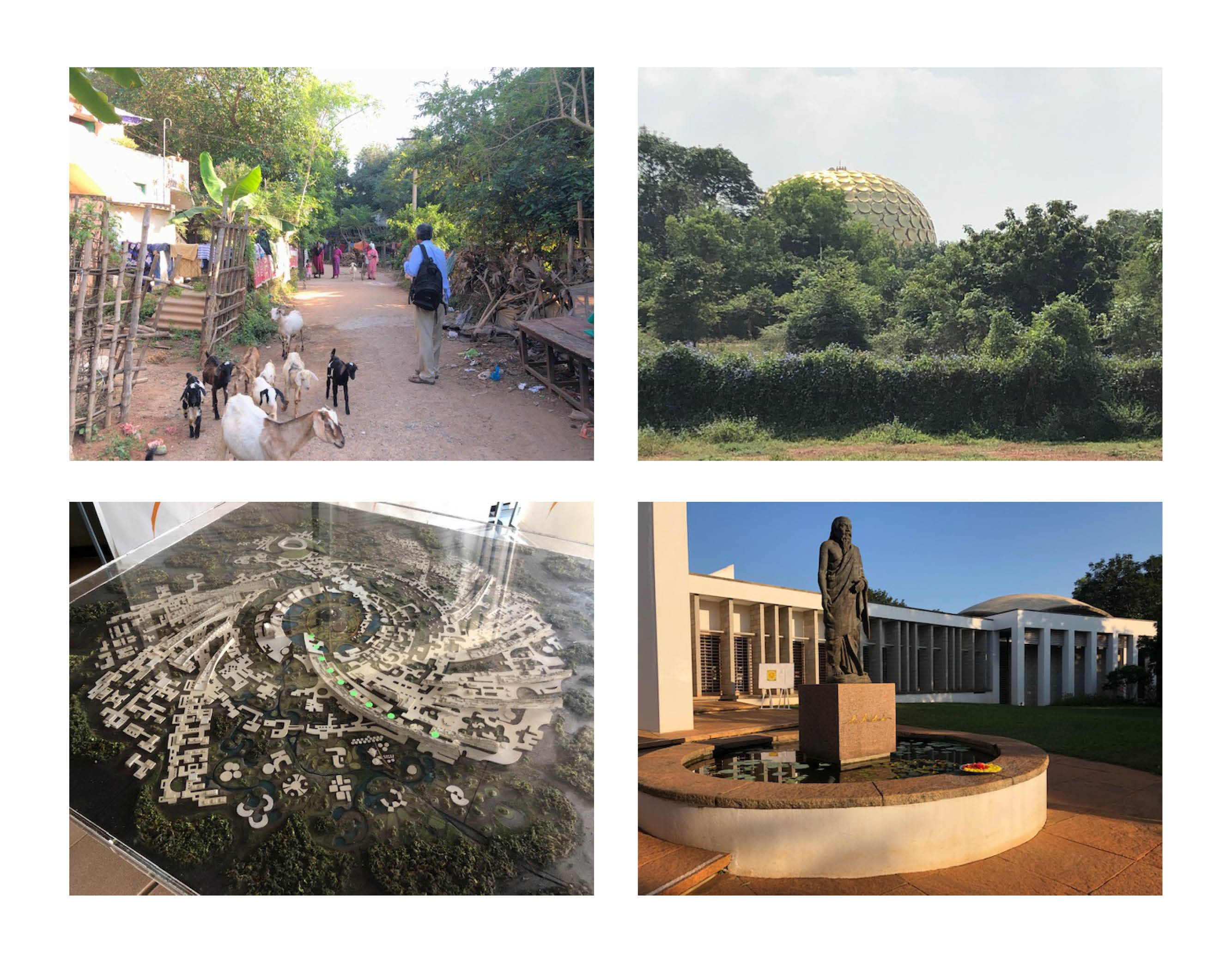 Workshops focused on how to re-establish unity as well as; how to address the pressing issue of water shortage through landscape design; potentially re-casting the city plan to reflect more environmentally friendly building types; integrating small scale agriculture; developing education including links with international universities; developing a better tourism strategy, and; widening participation in planning, particularly amongst younger people. There was also much discussion about the need for Auroville to work more closely with the Tamil villages in the bioregion to jointly tackle issues such as water conservation, ground pollution and transport.

A major success of the sessions was consensus on a pilot project to create a shared recreational green space for Tamils and Aurovillians as well as addressing a number of other issues. A concept design developed during the ‘Hands on Planning’ co-design sessions demonstrated how an integrated approach could allow the Tamils to sustainably expand their village, incorporate water management and create a sustainable transport circuit using electric vehicles to benefit tourists and residents alike.

An open and collaborative spirit prevailed during the workshops.  People commented that new voices were being heard. Honest and sometimes uncomfortable discussions took place, which seemed to move towards unblocking the way to progress, but the issues are complex and only time will tell whether the seeds planted at the January sessions will take root and flourish. I will certainly keep in touch and be willing to follow up with advice if asked. 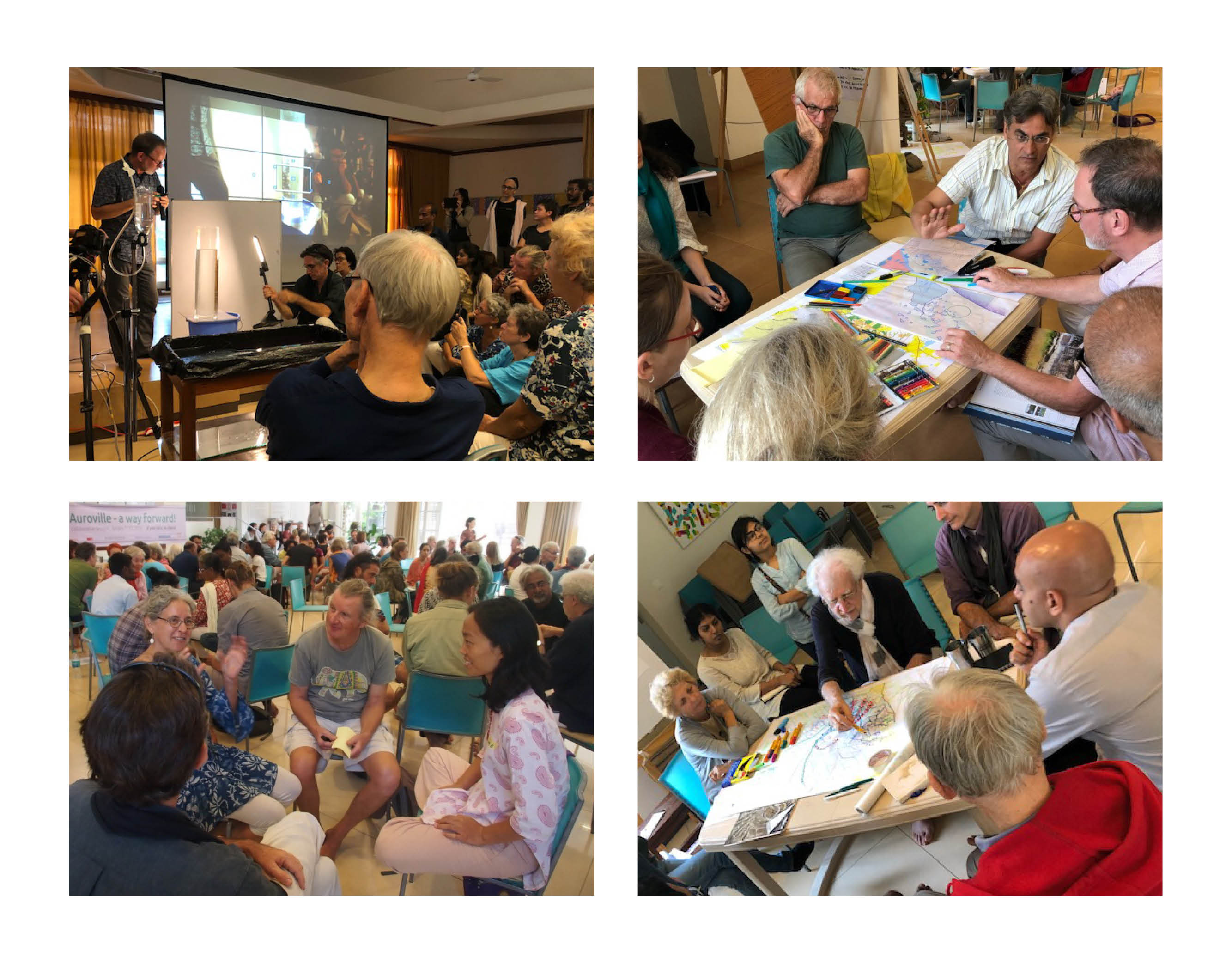