Civil Society Strategy puts communities at the centre of decision-making 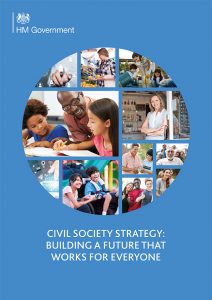 This August 2018, the UK Government has released its first Civil Society Strategy in fifteen years. The 122 page Strategy sets out a vision which places communities at the centre of decision-making and focuses on five key foundations of social value: people, places and the social, private and public sectors.

The Strategy, published by the Office for Civil Society ­– part of the Department for Digital, Culture, Media & Sport – not only provides a set of reforms across public and private sectors to build a fairer society, but describes a set of specific actions along with case studies to support these actions. One of these actions will be to launch an ‘Innovation in Democracy’ pilot scheme in six regions across the UK. This will offer creative ways for citizens to participate in direct democracy, such as citizen juries, participatory events and online apps.

In a recent article in Town & Country Planning magazine (TCPA, July 2018) Ying Ying Tian, Director of the China Design Centre, describes how China and the UK face similar challenges in identifying the right places to build while striking a balance between urban and rural landscapes. The article offers key learning points from a 2017 study tour of five UK towns with two groups of senior managers from Greentown China and Bluetown Group – sister companies which are currently building 30 new towns in China. Ying distils the learning points, not as a replicable model of English towns, but as a series of ideas on time, stewardship, systemic thinking and management.

The China Design Centre (CDC) is a dedicated platform between China and the UK to promote design and innovation exchange. You can learn more about Ying and the CDC at chinadesigncentre.com 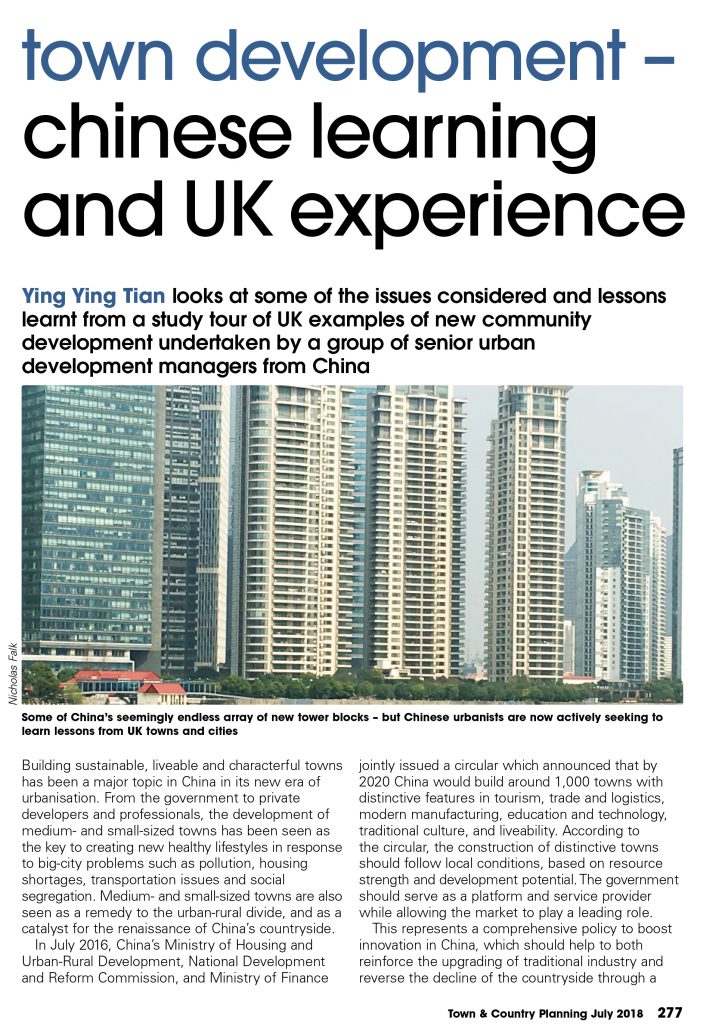 This is an update to the blog post from the 17th of July about the AIA R/UDAT revitalization workshops in New Orleans. The AIA team has just released a comprehensive report detailing the process and outcomes after working with local people to shape a vision for the regeneration of their neighbourhood. 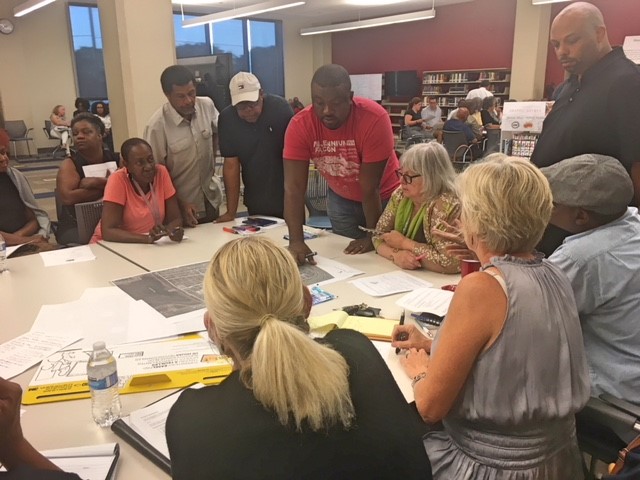 This past weekend a Regional & Urban Design Assistance Team (R/UDAT) from the American Institute of Architects (AIA) has been leading community revitalisation workshops in the Lower Ninth Ward of New Orleans, an area devastated by hurricane Katrina.

The Lower Ninth Ward is an urban district of New Orleans surrounded by water on all sides with a man-made canal to its north west and the Mississippi River to its south. Today just 6,500 people live there with a third of these households living below the poverty line. The new Mayor of New Orleans, LaToya Cantrell, has pledged city support to renew the restoration efforts.

The revitalisation workshops were spurred by a coalition of faith-based organisations, planners, architects and artists in the community which came together to organise a new effort for the urban regeneration of the neighbourhood.

“The role of the AIA team is to work with these partners and the community to create a neighbourhood-based strategy for the regeneration. The central components of the strategy are on generating equitable development that doesn’t displace the community but serves as a vehicle to facilitate economic mobility and strengthen community.” – Joel Mills, Senior Director of Communities by Design, AIA

The four-day workshop process has included meetings with the steering committee, local tours, stakeholder sessions, and an open house event. To ensure the AIA team is capturing and reflecting on what residents are telling them, they follow a series of feedback loops. 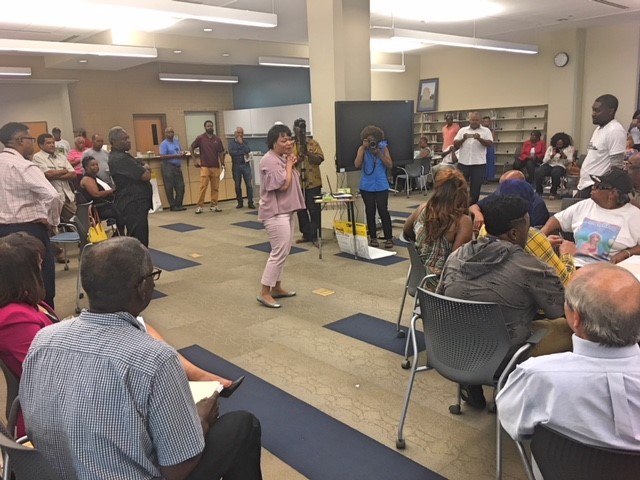 Prior to the weekend’s workshops, the AIA’s Communities by Design released a short film about the project which gathered over 12,000 views on social media. It’s believed the film helped bring significantly more participation to the workshops.

A resident in the film explains,

“The Lower Ninth Ward was historically, one of the most progressive, black-owned communities in the entire country.”

Before Katrina in 2005, nearly 20,000 people lived there over 90% of whom were African-Americans. The flood waters, a result of the hurricane and a breach in the levee, destroyed 5,000 of their homes. Following the destruction there were an estimated 15 attempts to recover the neighbourhood through different planning initiatives, but none were successful at helping restore the neighbourhood.

There appears to be a renewed sense of determination for people of this community. One resident said,

“This is the first time I have seen energy like this in the lower 9th. This feels like a new beginning.”

It’s a positive shift in a difficult story; no doubt many will be watching with hope as the AIA team, the local organisations and residents work together to build a brighter future.

The Lower Ninth Ward: Not Just Another Plan

On the 24 July 2018, the UK Government released a revision to its National Planning Policy Framework (NPPF), which sets out the Government’s planning policies for England and how these are expected to be applied. The Policy Framework takes a clear stance on early engagement with stakeholders and communities to ensure responsiveness to local interests and to maintain design integrity.

The NPPF was first introduced in 2012 and has since undergone scrutiny from a wide range of professionals in the public and private sectors. The revised NPPF declares that, “the creation of high quality buildings and places is fundamental to what the planning and development process should achieve”. This heightened emphasis on design quality is supported in the chapter entitled, ‘Achieving well-designed places’ which states that early and sustained engagement with stakeholders and communities should reflect local aspirations.

Paragraph 128 states, “Design quality should be considered throughout the evolution and assessment of individual proposals. Early discussion between applicants, the local planning authority and local community about the design and style of emerging schemes is important for clarifying expectations and reconciling local and commercial interests. Applicants should work closely with those affected by their proposals to evolve designs that take account of the views of the community. Applications that can demonstrate early, proactive and effective engagement with the community should be looked on more favourably than those that cannot.”

Chapter 129 says, “Local planning authorities should ensure that they have access to, and make appropriate use of, tools and processes for assessing and improving the design of development. These include workshops to engage the local community… These are of most benefit if used as early as possible in the evolution of schemes,  and are particularly important for significant projects such as large scale housing and mixed use developments. In assessing applications, local planning authorities should have regard to the outcome from these processes…”

Clare San Martin, Partner at JTP Architects, says, “This call for early engagement with communities will encourage clients to embrace a collaborative rather than confrontational approach.” She continues, “Overstretched local planning authorities under pressure to deliver schemes quickly, too often allow detrimental changes following consent. A good design code developed with community and stakeholder involvement can be a really effective way of avoiding this.”

For more information about the revised NPPF and to download the document please visit https://www.gov.uk/government/collections/revised-national-planning-policy-framework