The American Institute of Architects (AIA) Regional Urban Design Action Team  (R/UDAT) model has played a hugely important role in the development of collaborative planning and placemaking. Established over 50 years ago as a response to the civil rights movement of the 1960’s, R/UDATs have brought the skill of architects and other practitioners into hundreds of cities, towns and neighbourhoods across the USA to co-design visions with local communities.  Below, Robert Ivy sets out the emergence of the charrette methodology in the US and the early R/UDATs. He acknowledges the emergence of new technologies in architecture and planning today but reminds us that the fundamental purpose of Charrettes remains unchanged.

In a digitally frenetic time, when architectural technology has unleashed a plethora of unanticipated formal solutions to planning, design and construction, one humanely based architectural movement tied to democratic principles has thrived. Known by the acronym R/UDAT (Regional/Urban Design Assistance Team) this lauded programme has persisted for fifty years and spawned participatory charrette methodologies that flourish today – in North America and the UK, and around the world.

The relevance of democratic design is growing in this second decade of the twenty-first century. At a time in which societies all over the world are moving to cities at an unrelenting pace, and for the first time in human history, more of us live in cities than do not, the charrette model offers an optimistic perspective and an invaluable hands-on tool for city building.

The American Institute of Architects (AIA) is proud to have been associated with the development of charrettes through the R/UDAT programme, and we applaud the work illustrated in this book, which celebrates real results through case studies that demonstrate the diversity and richness of successful charrette methods, at a time when the world needs them more than ever.

Created in 1967 by AIA member Jules Gregory FAIA, and first held in Rapid City, South Dakota, the R/UDAT grew up and evolved in the civil rights era. Characteristic of their gestation in the 1960s, charrettes employ multidisciplinary teams of professionals to work with communities on a plan for urban change using the compressed timeframe. Today, after fifty years, over 150 R/UDATs have been organised by the AIA throughout North America, and the charrette methodology has been accepted and translated around the world.

Neither size nor scale limit the application of charrettes. Small towns and neighbourhoods, struggling economically, have seen light and hope, as have larger cities devastated by climatic events. In the US, universities, municipalities, state and federal agencies have adapted R/UDATs, and mayors have been among their most fervent admirers.

Millions of people today enjoy the results of charrette processes worldwide, and they have influenced professional practice as well. In the US, for example, the revitalisation of Portland’s successful Pearl District came about through a R/UDAT, as did the Santa Fe Railyard redevelopment, and the renaissance of tornado-hit East Nashville, to name a few.

During the past fifty years, technological innovation has exploded. We all look to see how new tools will affect future planning. The more humble tools that spurred the earliest convocations, the ubiquitous pens and pads and tape, have been joined by architectural software and communication tools that enable visualisation, a way of seeing in three or four dimensions, or that allow collaboration to happen in easier, more seamless ways.

While the tools have changed, their fundamental purpose has not. The convening of citizens through charrettes – enlightened, purposeful and committed  to design in its highest sense – offers hope for cities, towns and neighbourhoods struggling to find new models. Its democratic message explicitly promises us all that collective human intervention can be directed to positive ends.

Leading the Way with Kindness

In the second half of the 20th century, a decline in the textile industry resulted in the towns along the Upper Calder Valley, Yorkshire, England suffering from neglect and failing local economies. JTP architects and community planners were commissioned by the then regional development agency Yorkshire Forward to run the Upper Calder Valley Renaissance process to work collaboratively with the community to co-create a new Vision for the valley and establish a Valley team. Fifteen years on, a revitalised and enterprising community has come together to organise the Incredible Festival of Ideas where community and practitioners will come together to learn from each other in a celebration of community, creatively and kindness.

Leading the Way with Kindness

How do we live and bring in new ways of being in our communities? The Calder Valley would like to show you how. While Hebden Bridge has always been known for being a unique place, the Calder Valley, from Todmorden to Halifax, has many experiences to offer; experiences that invite you to see why people move there and love living there.

A “Pay as you Feel” event, The Incredible Festival of Ideas is 4 days celebrating the birth, 10 years ago, of Incredible Edible, which has influenced communities worldwide, not simply with food, but on how to live with kindness and independence at heart. Opening with a solstice celebratory picnic and philosophy walk and exhibition in grade 2 listed Todmorden Town Hall, the weekend invites you to be inspired.

The Incredible Festival of Ideas includes two conferences, one on Placemaking sharing local views with national thought leaders, and the second focusing on how to build Resilience in flood affected areas.

As well as Incredible Edible tours where you’ll see maverick flower and food growing beds and benches to overcome loneliness, there are two ‘foodie’ days with important themes about sustainability and combating poverty. Jarvis Cocker from Pulp will even be doing a set on the Saturday night.

There’s also a radical version of Ted Talks, aptly named “Tod Talks”, where the main themes are Sex, Death and Currency (kindness not crypto) and all the other stages in between. It’s an incredible mix of local people with radical ideas, including leading campaigners from Transparency International and a leading lawyer for clergy abused in the church.

“The Festival is showcasing a way to live and in a beautiful valley too. We’re talking about ideas that really matter about place, connection and support and a triumph of hope in everyday life. Join us and see what the fuss is about and be inspired with ideas to make your place home too. Rather than say ‘something must be done’ come and see how we do it.”
—Mary Clear, Incredible Edible Todmorden

The festival coincides with the Hebden Bridge Arts Festival, the much-loved Handmade Parade and the Incredible Fabulous Feast at the iconic, Grade 1 listed Piece Hall Halifax – a Jo Cox Foundation Great Get Together Beacon Event – making it a ‘chock-a’ weekend worth visiting.

Underneath all this creativity, the local organisers, volunteers and conference speakers are giving their time for free. In joining together to make this happen, kindness, enjoyment and idealism bring us together.

Incredible Festival of Ideas
21 – 24 June 2018 in the Calder Valley
Various locations, many free events with Pay as you Feel where specified,
see website for details: incrediblefestival.org.uk 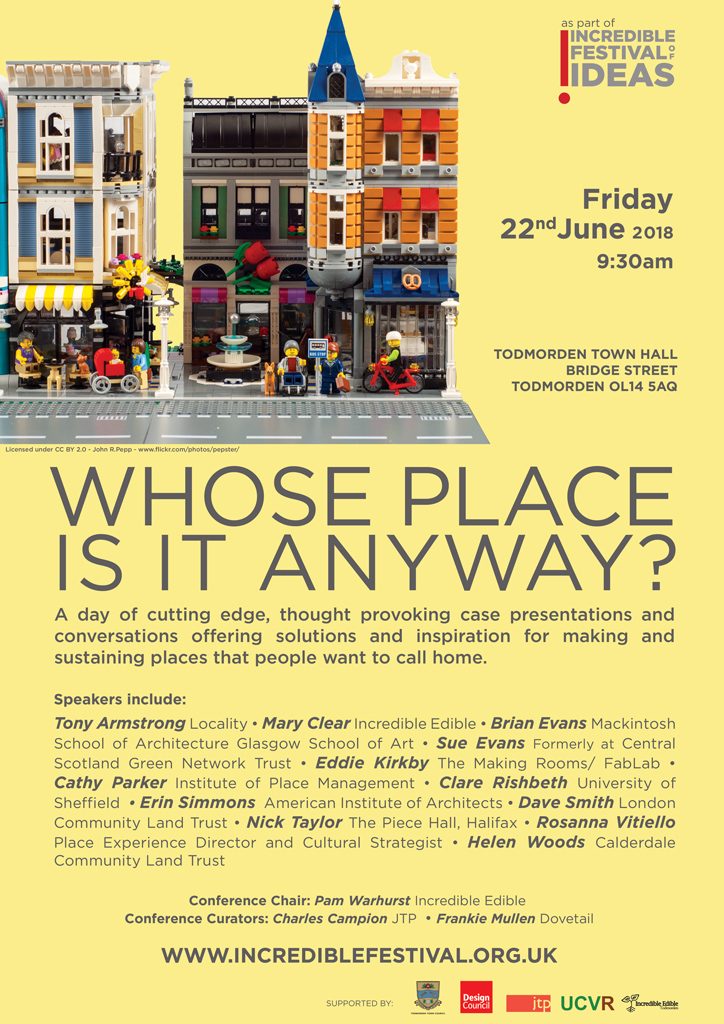 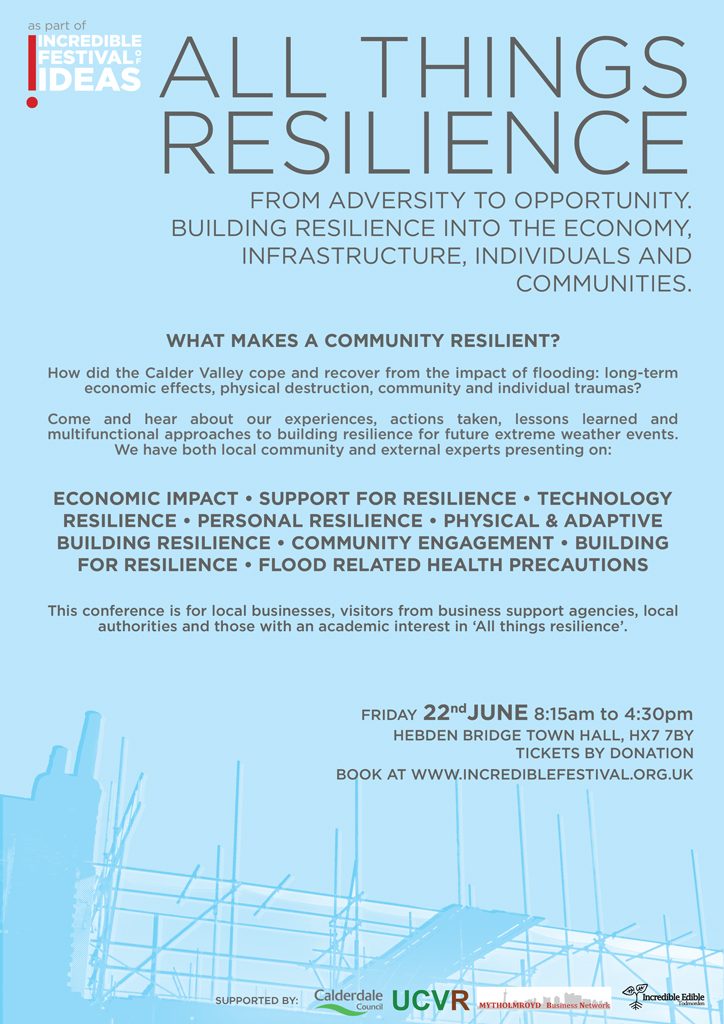